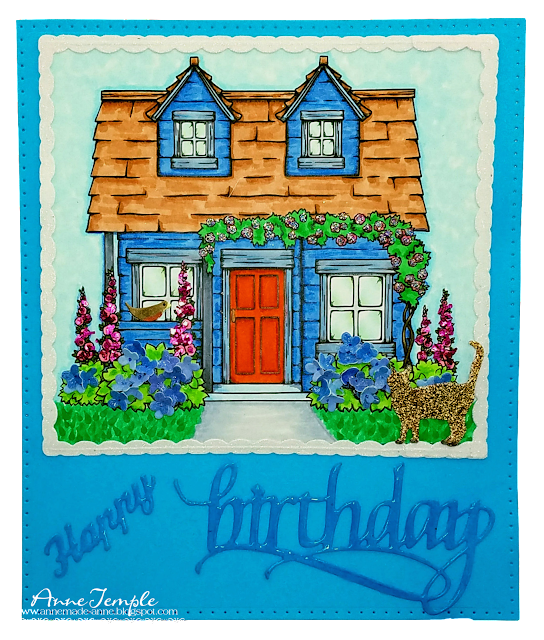 WE NOW HAVE TWO WINNERS PER CHALLENGE.  One is random and the other is chosen by the Design Team.  Each winner will receive a $10 gift certificate to go shopping at Scrapy Land.

You have until Sept 3 to join in on the fun.  Each winner of the challenge will receive a $10 gift certificate to go shopping at Scrapy Land.

I created this special birthday card for a friend and I used the following dies:

The digi image I used is called Little Cottage and is from Beccy's Place.  After printing it out, I colored it with Copic markers.  Then I began adding my details, starting with the flowers. 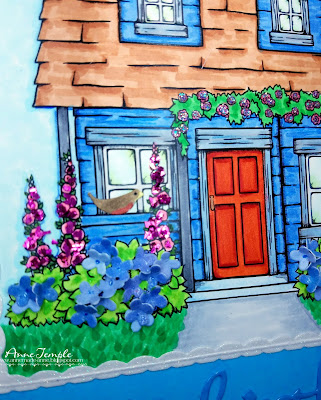 I began with the hydrangeas in the front and added some dimensional blooms.  Using Distress Ink and the Direct to Paper method, I colored a scrap of cardstock with a couple different colors and then heat embossed it with Clear embossing powder.  This gave the petals a bit of shine.  Then I used the Elizabeth Craft Designs hydrangea die and cut out the petals, shaped them, and adhered them to the front.  I added Fuchsia Glass Glitter to the Holly Hocks behind the hydrangeas and Bubblegum glitter to the flowers on the climbing bush.

I want to point out my little "bird" perched on the porch railing.  It is actually one of the negative pieces from the Posy Pillar Strips.  It looked like a bird to me, so I used Copics to transform it into a Robin. 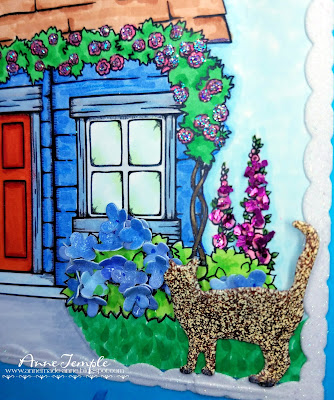 The cat on the right side of the image is from Impression Obsessions and he is heat set with Sandstone embossing powder from Sparkle N Sprinkle.  You can also see the dimension on the hydrangeas as well as how much dimension the glass glitter gives those blooms.

The frame around my image was created by using the two outer dies from the Blocked Parquet and Garden Trellis die set.  It was actually a bit too long, so I cut off one of the ends and re-glued that end on top of the rest of the frame to make it smaller.  A trick to hid the lines created from the overlaping of the die is to heat emboss.  And that's what I did here.  Not only does the Velvet Sparkle embossing powder camouflage the lines, it also gives it some sparkle.

To create the card base, I used the Sue Wilson die.  In order to create a folding card using this die (versus a card mat), make sure that the top die cut line is placed above the fold in your cardstock before you run the die through your machine.  This way, you don't cut the top edge, but it will die cut through the rest of the folded cardstock.

My sentiment was die cut from the same color cardstock as the card base.  In order to make the words stand out, I heat embossed each die cut with Clear embossing powder and adhered them to the card front. 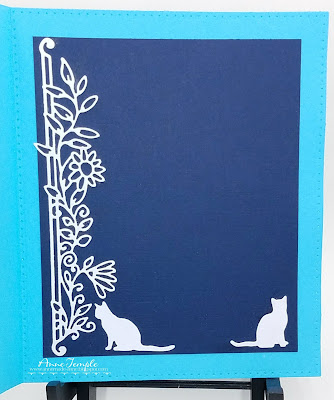 I also added a bit of interest to the inside of the card by adhering one of the Posy Pillar Strips to a piece of dark blue cardstock as well as a couple more kitties from the Impression Obsession set.  I used a white pen to add my personal message.

Now it's your turn to come join in on the fun.  Be sure to visit the Scrapy Land Challenge Blog to see what the rest of this very talented team has created for you.

Wow, Anne! Your card is STUNNING! I bet your friend loved it! I adore this image and all your tiny flowers! Hugs!

Those tiny flowers are such a gorgeous addition to this amazing card! Love it.
Hugs
Samra
Paper Talk with Samra

Anne this is a beautiful card! I love the pretty house with the red front door! I was in awe of the house that I almost didn't see the sparkly kittie! Love the way you decorated the inside of the card too!

Wow, gorgeous card and wonderful coloring! The tiny flowers add so much dimension and I love the sparkle! The cat is amazing Anne..love him! Great job on the design!
Have a wonderful day!
Sherrie K

Wow, Anne, this is stunning!! I love the beautiful house adorned with blooms and color!! Wow!! The touches you added like the bird and cat are perfect!! I love this!! So creative and gorgeous!! Have a great day!! Big hugs :)

So pretty Anne! So much detail. All those little flowers are gorgeous!

Your coloring here is just stunning! What a beautiful, bright and happy card! Love it Anne! Hugs, Autumn

Such a happy cottage, Anne. Love the bright and cheerful colours you used. The inside of the card is just as pretty.
Hugs,
Lena

Beutiful card. I love colors which you used! All is perfect! Hugs Ola

Such a stunning card Anne xx Your friend will treasure it for sure. I love the colours and stunning layout.

Hope all is good with you...sending my best wishes

Absolutely stunning! Such a pretty scene!
Have a wonderful day,
Migdalia
Crafting with Creative M