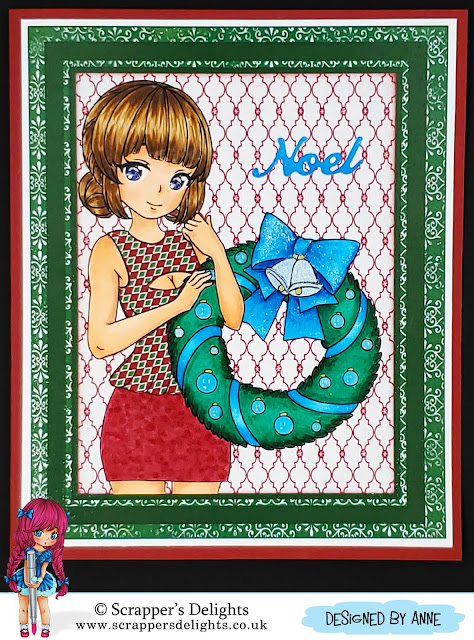 Hey everyone, today Scrapper's Delights is combining the Anime New Release and VIP Deal, which is normally the last Friday of the month, with the Chibi New Release and VIP Deal, which is the first Friday of the month.  This special event is so that we can all enjoy the holidays without feeling stressed to get things done at the last minute.  This gives you time to create a few more cards or projects using both of these New Releases 😀.

First up, I'd like to share my Anime New Release.  There are three new images (Anime Xmas Stocking, Anime Xmas Tree, Anime Xmas Wreath) plus the VIP Deal.  The best deal is to get the VIP Deal as you'll receive all three of the new Anime images as well as the Zodiac image and tons of elements. 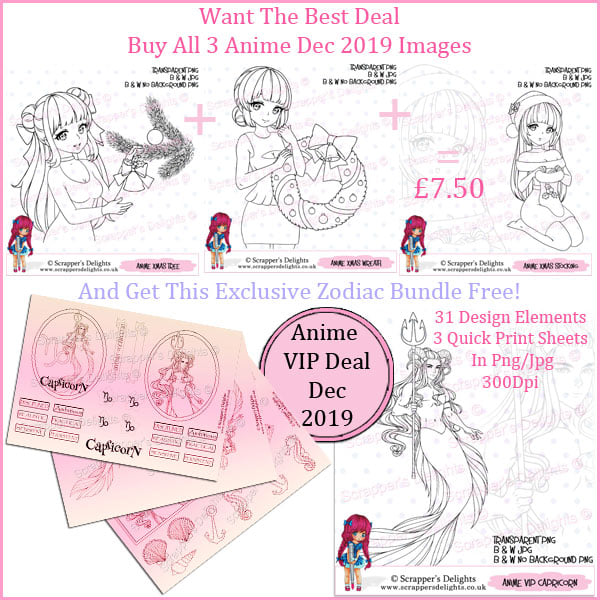 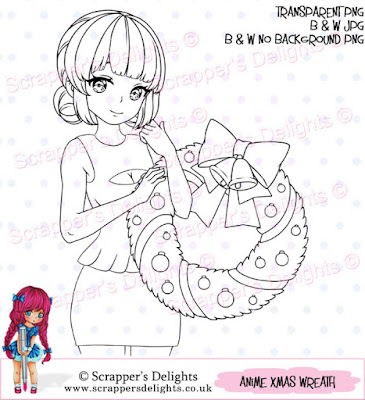 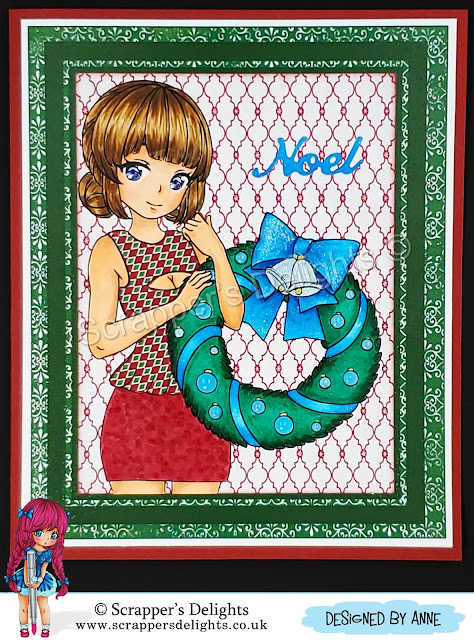 I used the Anime Xmas Wreath image and colored her with Copic markers.  One of the things I really like about these digi sets is that one of the .pngs is in an outline form.  So, if you want to add patterned paper for clothing, for example, it's really easy to do.  That's exactly what I did for her top.  I layered the outline image on top of the digital paper, angled it in the pattern I wanted, then printed it out.  After it printed, I fussy cut out the top and paper pieced it on top of main card that I printed.
All of the patterned papers and frames are digital.  Even though it looks as if it has some dimension, it's flat for easy mailing!

I also colored the wreath with Copics and added Nuvo Crystal Drops for the ornaments. Sparkle was added to the bow and ribbon using Spectrum Noir Sparkle markers

My sentiment is a Die-Versions Sweet Sentiment die that was die cut from a scrap of white cardstock and colored using the same Copic marker as the ornaments.

Now for my Chibi VIP Deal card.  There are also three new Chibi images being released today and the VIP Deal.  The Zodiac VIP Bundle Deal is definitely the best way to go. 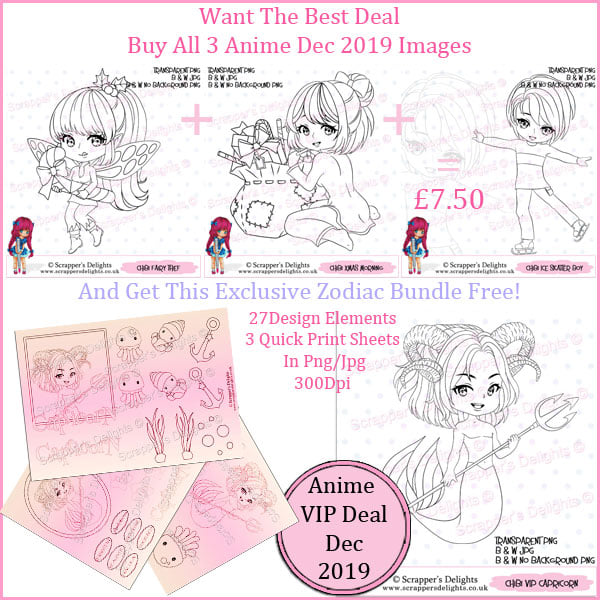 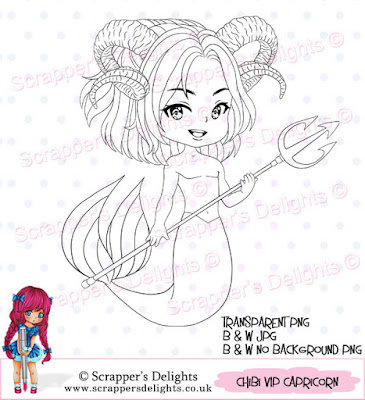 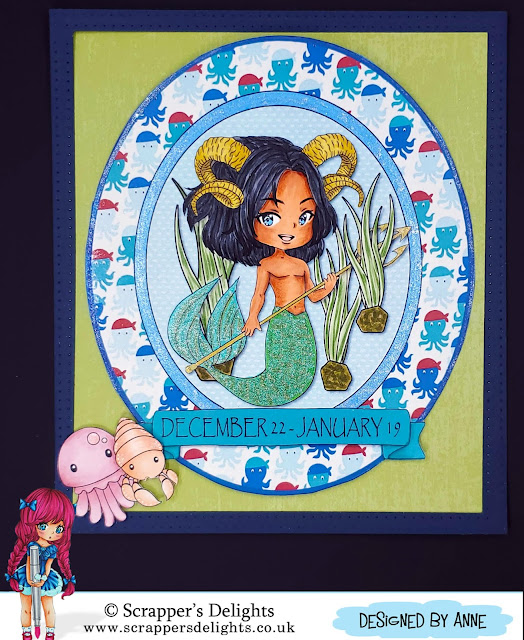 I used a number of elements from the Chibi Zodiac VIP Deal set to create today's card, including the oval, the seaweed, the date banner, and the cute little critters in the lower left .

I started out by positioning the image and the elements where I wanted them, then I layers a couple different patterned papers behind the scene I created and printed it out.  I printed the two little guys separate from the main focal point and fussy cut them out. 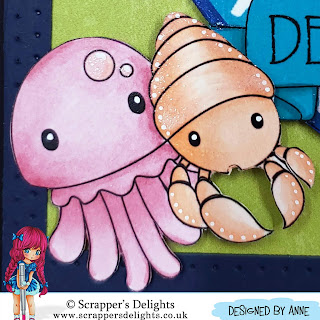 Copics were used to color the images.  Spectrum Noir Sparkle markers give added sparkle throughout the card.

I fussy cut out the focal image and then layered it onto patterned paper and created my frame with a Sue Wilson Designs die set (Noble dies-Double Pierced Rectangles Set B) and dark blue cardstock.

After everything was adhered to my card base, I added the two little guys in the lower left corner with dimensional tape.

Scrapper's Delights will be starting the New Year with brand new images and other fun things that are still under wraps for the moment.  I'll be back with another Scrapper's Delights project using one of the Chibi New Releases on Friday, January 3. 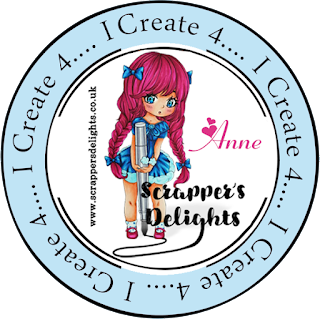 Cute stamps and fabulous cards! LOVE the paper piecing on that first card. Your coloring is so pretty too.
Lynn

Wow! These are lovely Anne. Your digi skills are amazing. I wouldn't know where to start with all the layering you do!

Fabulous coloring and paper piecing, Anne! I adore your framing of each image.

Anne, you have created yet another beautiful card! Fabulous coloring! You have inspired me for years! Thanks! Fabulous job!
Hugs,
Jan

Thrilled to learn about Anime designs! A young lady I know loves Anime, now I will impress her with cards of her favorite characters. I'm getting Anime designs. Thanks for letting me know.